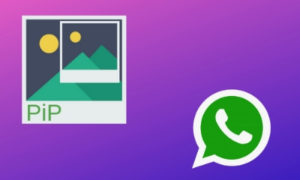 WhatsApp recently launched a new feature to all its Android users — Picture-in-Picture (PiP) mode.The new feature had been under testing for a few months and users can now finally test it out by updating the application through the Google Play Store.

What is PiP mode?

When you click on a video link sent by someone on WhatsApp, the system instantly triggers the corresponding app to open. With the new feature, you can watch the videos in a box hovering over the chat window, saving you multiple taps on the recents button.

How does the PiP mode work?

The PiP feature works with third-party video apps like Facebook, Instagram, YouTube and Tumblr . You can confirm whether the media supports PiP (or not) by looking out for a blurred version of the thumbnail as well as the platform logo. If it’s present, it means the content supports PiP. All you have to do is tap on the thumbnail or link to open the media in a hovering box.

The PiP mode appeared first on WhatsApp beta, so that it could be tested and tweaked before it was made available for the final stable version.

if you’re the one who wishes to check out features that haven’t made their way to the stable version, simply click on this link and become a WhatsApp beta tester. However, WhatsApp beta is known for having bugs and crashes, so be aware of what you’re getting into. You can always opt out of beta by going to the same link. Some new features under testing include swipe to reply, consecutive voice messages, QR Codes and group calling shortcut.