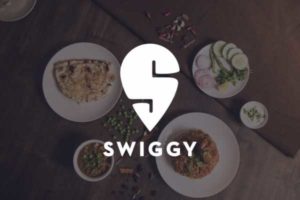 India has 243 million internet users and this number continues to grow fast. We believe that the power of mobile internet is going to help us achieve this goal,” said Flipkart’s cofounder Sachin Bansal. The goal for the then 32-year-old was to create a $100-billion company over the next few years.

Bansal’s mission statement on July 29, 2014, came as part of the announcement of an eye-popping, never-seen-before $1-billion funding in the country’s hottest startup, which set the ball rolling for a slug of capital to flow into the local entrepreneurial ecosystem. His boosterish demeanour was evident, as he took a microphone and stood alongside his unassuming cofounder Binny Bansal in a south Bengaluru hotel, in a rare appearance in front of the media, as the online retailer stepped into the big league of internet startups, globally.

Flipkart, the Bansals and investors backing these upstarts were exuberant about the domestic consumer internet story on the back of Alibaba, the Chinese ecommerce giant, which was slated to list on the New York Stock Exchange with a much-ballyhooed IPO, valuing it at around $150 billion. But going public was not on the cards for Flipkart, at least in the near-term, Bansal had said. The company was chasing sales and frenetic growth at the time.

Cut to the end of 2018, and things have changed. The novelty of billiondollar financing is surely gone, and businesses are making an attempt to temper down the euphoria around funding. Swiggy’s recent $1-billion fundraise seemed rather muted. No forward-looking projections by the company and no press conferences. In fact its cofounder Sriharsha Majety, in an email to the company employees, threw in a word of caution: “Many large startups before us have had this inflection point in their fundraising efforts, and it’s important not to get carried away and be complacent. In the end, fundraising makes sure we don’t lose but doesn’t make sure we win.”

Even while being in a high-burn sector, the temperament and tone of entrepreneurs helming unicorns is slowly changing. 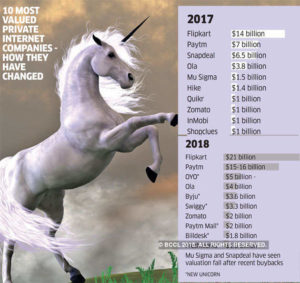 THE FLIPKART SALE WAS SEMINAL
In May this year when American retail giant picked up 77% stake in Flipkart, valuing the posterboy of Indian startups at $21 billion, it was a bittersweet moment for most in the still-evolving entrepreneurship ecosystem locally. Not only was Flipkart seen as being the flagbearer of India’s new economy, built on the back of fast-growing internet companies, its founders Sachin and Binny Bansal were seen as role models for an entire generation of entrepreneurs, which spawned on the back of the success enjoyed by the Bengaluru-based duo.

After an eleven-year independent run, and with both the founders now out of Flipkart within few months of each other, many questions have popped up about what’s next for the country’s fledgling startups as well as risk investors betting on possibly the only market they think can replicate China.

Flipkart set the ground for the first set of consumer internet startups to thrive over the past five years. These targeted the initial 100 million online shoppers, mostly in the top six cities, and tapped the marketplace model, aggregating fragmented offline businesses and services.

But things may start to change. Is the Flipkart model of building businesses, which is reliant on billions of dollars of investor capital, sound for a market like India, which is still to find its depth? What happens when you ratchet external money and dilute heavily the stakes of founders? Would we see a fundamental tinkering of the Flipkart model of scaling up of business?

What’s interesting is that they are in very disparate sectors like insurance, education, hospitality, food delivery, enterprise and businessto-business (B2B) commerce.

What has changed now is the ability of startups to scale up quickly, executing at the speed of light, as they know capital will follow. For instance, B2B startup Udaan, founded by three former top Flipkart executives, was able to scale up to gross sales of about $500-600 million in September, little over two years after setting up the company. It also became the fastest Indian startup to reach unicorn status, soaring to a $1-billion valuation milestone in merely 26 months of registration. It beat Swiggy, which had taken four years to become a unicorn just a few months earlier. Flipkart had taken seven years to hit a billion-dollar valuation.

Similar stories of quick and aggressive execution are being seen across startups beyond the typical ecommerce space now. Budget hotel aggregator OYO has scaled to 1,80,000 rooms in China in the span of one year of starting operations in the country, more than the 1,47,000 rooms that it has in India. The company now has around 10,000 employees, with half of them in China.

BUT WILL THINGS REALLY BE DIFFERENT?
According to investors, the way some tech-based platforms are disrupting the traditional industries like hotels, in the case of OYO, reflects a different approach from the way companies have been built till now.

“OYO is one of the first players that has been able to aggregate supply while other major internet platforms till now have primarily been aggregating demand, from MakeMyTrip to Swiggy. That story is becoming more interesting for the Indian internet market,” added Lunia.

Surprisingly, some of the new Unicorns in the consumer internet space like online financial services marketplace Policybazaar and Byju’s are also profitable. Entrepreneurs of these companies talk about unit economics and profitability more frequently, compared to the earlier batch, even though the path remains just as tough.

Another factor at play is that with the Flipkart founders out of the company, both Sachin and Binny Bansal may become a leading source of domestic capital, considering that between them, they have a couple of billion dollars to invest. Both have already taken wagers — Sachin made a $100-million investment in Ola and Binny bet $25 million in insurance startup Acko Technologies. And the talent pool that Flipkart has created could help some of these companies iterate much faster.

However, the reliance on investor capital, mostly foreign, is still very much intact among Indian startups. What’s encouraging is the fight for greater control from founders, especially in the light of what happened at Snapdeal and then later at Flipkart. Founders of ride-hailing major Ola, Bhavish Aggarwal and Ankit Bhati, have taken the lead among the new-age internet companies to negotiate rights that protect their interests to avoid investors like SoftBank from calling the shots. In 2017, the duo altered the Articles of Association (AoA) of the company to safeguard themselves against the largest shareholder SoftBank increasing its stake further or pushing for a possible sale or merger. SoftBank is also the largest shareholder in US-based rile hailing major Uber, Ola’s main rival. Aggarwal has also been adding allies to the company board since last year and roped in investors like Singapore sovereign wealth fund Temasek, which have aligned their voting rights with the founders. It remains to be seen if other founders can replicate this and move to wrest control.