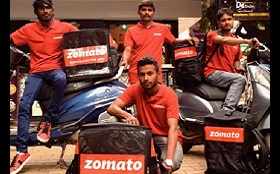 MUMBAI: India’s food delivery space is at its hottest right now.  Food delivery firm Zomato claimed to have hit the 21 million monthly order run rate in India in September. The firm saw its highest daily order volume during the month touch 700,000 orders each day of the week.

“At the beginning of 2018, we were at 3.5 million orders a month. With 21 million orders per month, as far as we know, we are now the market leader in the food ordering space in India,” wrote Zomato CEO, Deepinder Goyal in a blog post on Friday.

Interestingly, in a blog post in August 2017, Zomato claimed it had reached the 3 million monthly order volume mark.

Industry sources however peg Zomato’s absolute order volumes at over 14 million as of September. Swiggy clocks over 20 million monthly orders in absolute terms as of September, the persons cited above said.

“We were present in 15 cities in India, at the onset of this year; our food delivery business is now active in 38 cities in India. With this pace, it’s only a matter of time before we launch our food delivery business in 100 cities. While on absolute volumes, Zomato may be trailing Swiggy, its growth in the online ordering business has been rather strong with the vertical becoming the largest for the Gurgaon-based firm, now forming 65% of its overall revenues from the 35% it formed as of January, Goyal wrote in the blog post.

About 86% of the orders are now fulfilled by Zomato’s own logistics across its fleet of 74,000 delivery agents as compared to a 26% self-fulfilled delivery rate as of January.

Swiggy has a fleet network of over 90,000 delivery agents across India with all deliveries self-fulfilled for the firm.

Zomato ended FY18 with a 40% growth in revenues at Rs 466 crore even as losses shrunk by almost 73% at Rs 106 crore as compared to Rs 390 crore last year, ET had reported in September.

FY19 is however, expected to see the firm’s losses and expenses rise tremendously as the food tech industry is engaged in a discount driven battle between Swiggy, Zomato, UberEats and Foodpanda to grab larger mind shares and wallet shares of users.

For Zomato, the growth in its food delivery business is costing the Ant Financial backed firm a monthly cash burn of over $20 million while rival Swiggy is burning $16-18 million to stay ahead of the race, ET had reported in July.

For Zomato which has been discounting heavily across markets in Bangalore, Chennai, Hyderabad as also newer cities it is launching in, revenues from its allied businesses such as subscription program Gold and its advertising business have helped cap a portion of the monthly cash burn.

The deep discounting has led to a spike in the number of new users being added on the platform monthly to 2.4 million in September from 0.19 million in January.

Zomato Gold is currently available across over 4000 restaurants and has about 500,000 members so far, the firm said.

Zomato claims its gross merchandise volume on an annualised (projected run rate) basis hit $1 billion in September growing from $210 million as of January with the firm having increased the number of restaurants on its platform by almost 93% over the last 9 months to 54,000. About 7,500 of these restaurants are exclusive to Zomato.

Zomato however, claims its order value is higher at around Rs 320 due to “a premium set of users owing to our reviews business and Zomato Gold, which keeps our average order value higher than competition,” a spokesperson for the firm said.

The average order value for UberEats and Foodpanda is pegged at between Rs 50-70, as per sources mentioned above. UberEats clocks about 3.5-4 million order per month while FoodPanda clocks 1-1.5 million monthly orders as of August.