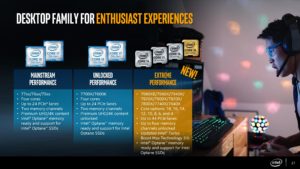 Then there is the Core X series, which is targeted at professionals with more resource-intensive work requirements. It includes seven variants starting at $589 in US. Its top-of-the-line variant packs in 18 cores and 36 threads, and is priced at $1,979. For users with heavy workloads, Intel has announced a 28-core chipset, Xeon W-3175X, for workstations. It will be available from December 2018, while the other two family of chipsets will hit US stores in November 2018. There is no word on when the mobile version of the new chipsets, for laptops and 2-in-1s, will be available.

In terms of performance upgrade, Intel’s tests suggest up to 11% more frames per second (FPS) in games such as Conquerors Blade and Total War: Warhammer II. The new chipsets support refresh rates of up to 220fps, which means a smoother gaming experience. Similarly, editing videos in Adobe Premier Pro is going to get 34% faster compared with 8th gen chipsets. Clearly, upgrading to the new chipsets will speed up things for professionals involved in gaming, content creation and video editing.

Overall, upgrading to desktops running the new chipsets will lead to sizeable cost for companies. Going for all-in-ones and desktops can cost a little more based on what other hardware—such as graphics processing unit, random access memory and storage option—the new chipsets have been clubbed with. Building a custom desktop will be a more cost-effective solution, and offers more room for customisation.