BENGALURU: Ecommerce companies are turning to every nook and cranny to deliver packages. As the festive sales inch closer, top ecommerce companies are readying their logistics army to ensure smoother and faster deliveries, while delivery executives make some extra buck capitalising on the surge this October.

To handle high volumes, homegrown etailer Flipkart has launched a mobile app FQuick, which allows people to sign up as freelance last-mile delivery executives. While launched a year ago, Flipkart has ramped up this service to 40 cities in the last one month. FQuick is expected to contribute to almost 10% of Flipkart’s eKart last-mile deliveries during the upcoming Big Billion Days sale (BBD). 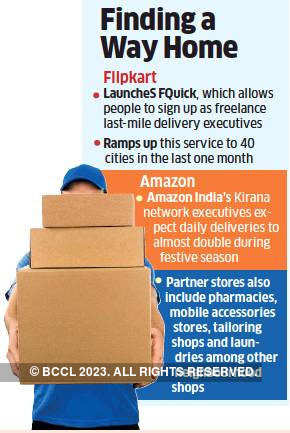 “The idea is to provide an opportunity to people who have some time to fill but do not have a chance to fully utilise it and make money,” said Amitesh Jha, head of Flipkart’s logistics arm, eKart. “For instance, if there’s a security guard whose shift ends at 8 pm, they can do 4-5 deliveries for an hour after that and make some extra money.”

Daily shipments during the festive season are expected to surge past 3 million, as per industry estimates. The festive sales by Flipkart and Amazon will clash on October 10, as both eCommerce giants are vying for the top place in the Indian online retail market.

While Flipkart expects to cross $1 billion in gross merchandise value (GMV) during the five-day BBD, Amazon India hopes to increase their sales by “manyfolds” this year.

The company is also ramping up its Kirana network to ease last-mile deliveries in remote areas.

Amazon’s network of kirana stores has expanded to 20,000 retail outlets across 350 cities from 17,500 such stores last Diwali, which has helped the ecommerce company further strengthen its last-mile delivery.

The partner stores include not only the general stores but also pharmacies, mobile accessories stores, tailoring shops, and laundries among other neighbourhood shops.

While the company did not share how many orders it is seeing being delivered through this channel, industry estimates put the number at one in three.

“It is becoming a significant channel for delivery, especially in small towns and cities,” said Akhil Saxena, vice president, customer fulfillment at Amazon.