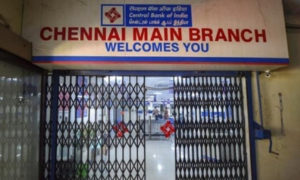 New Delhi: As several PSU banks were closed for two days this Tuesday and Wednesday to protest against government policies, an employee union leading the strike has claimed that clearance of cheques valued over Rs 20,000 crore was stuck as a result.

In a statement, the All India Bank Employees’ Association (AIBEA) said cheques worth about Rs 20,000 crore could not be cleared by the clearing houses all over the country, news agency IANS reported yesterday.

Along with the Bank Employees’ Federation of India (BEFI), AIBEA had supported the two-day Bharat Bandh call given by a group of ten central trade unions. A section of bank employees has been protesting against the merger of PSU banks and demanding a wage hike.

During the two-day bandh, several bank branches were closed while operations were affected in others. The impact of the strike was however limited to few state-run banks like IDBI Bank, Bank of Baroda, Allahabad Bank, Indian Bank, etc where scores of employees refrained from work in protest. Protests were held even at offices of the Reserve Bank of India (RBI).

SBI and private banks, on the other hand, were out of the ambit of the strike as their employees were not affiliated to the striking unions.

“Even though officers in banks did not join the strike, they have extended fraternal support. Hence, though branches are kept open, normal banking services like cash transactions, clearance of cheques, remittances, bills discounting, government treasury operations, foreign exchange transactions, negotiation of import and export bills, were affected,” the AIBEA said.

Finance minister Arun Jaitley had recently blamed around 6,000 officers of nationalised banks for lapses that led to bad loans.

“As per the inputs received from nationalised banks, in FY 2017-18, 6,049 officers have been held responsible on account of staff delinquency in NPA accounts…,” Jaitley had said in the Lok Sabha adding that erring officers have been punished with dismissal, compulsory retirement and demotion.