MUMBAI | NEW DELHI: Risk capital investors have ploughed in over Rs 50,000 crore ($ 6.9 billion) into India’s fastest growing startups this year as they jostle to back winners in one of the world’s most dynamic entrepreneurial hubs.

The bulk of the capital — nearly 85%, or about $6 billion — has gone into companies in the high growth stage, referred to as Series B deals in industry parlance, according to research firm Tracxn.

Nearly 50 startups, including Swiggy, Zomato, PolicyBazaar, GreyOrange and Udaan, are among those which have soaked up mega cheques of over $100 million apiece. With hotel chain OYO having sealed a mammoth $1 billion investment led by Japan’s SoftBank this month, the appetite among investors to deploy massive capital in the industry leader rather than parking smaller amounts across multiple contenders, is now becoming the norm, said industry experts. 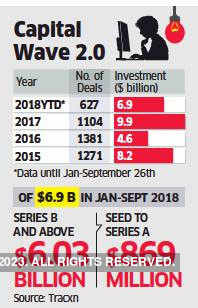 Sharp Turnaround
“What was the typical M&A exit valuation five years ago, has now become the size of a funding round. That shows the depth of the market and its potential to absorb large amounts of capital,” said K Ganesh, founder of startup incubator GrowthStory, who has backed grocery portal Big-Basket and healthcare provider Portea.

The Indian startup industry celebrated a milestone marker this year when Flipkart, the country’s most valuable internet startup, sold a majority stake to American retail giant Walmart for a whopping $16 billion.

The deluge of cash this year, which looks set to exceed the amount of $9.9 billion invested in all of 2017, underlines the sharp turnaround from the sluggish capital formation in 2016 when both growth and early-stage investments in the country totaled $4.6 billion.

However, investments across seed to series A stages pales at $869 million so far this year, as compared to the capital rush of 2015 when early-stage investments crossed $1.6 billion. The number of deals at the seed and angel stage too are fewer at 339 deals in 2018 so far as compared to 762 across 2017.

Industry analysts are of the view that this is a temporary and “necessary” anomaly, as investors look to weed out great ideas from the also-ran and hunt for investments with greater assurance of returns.

“(There will be) selective funding for early-stage ideas and continued cautious cycle for ideas without a clear product market fit, which means more exit potential but an overall sluggishness at the seed and series A stage of investments,” said Anuj Srivastava, founder & CEO of Livspace which raised $70 million from TPG Growth and Goldman Sachs in the last fortnight.

In addition, with several earlystage venture capital funds having raised new funds — such as Sequoia Capital India, Matrix Partners, LightBox Ventures amongst others — industry executives believe the tide has already started turning and there will be a strong uptick in earlystage investments.

For now, big-ticket funding is going to businesses being built for the next 100 million internet users, as smartphone penetration improves and the cost of broadband data drops.

This category of users are also those underserved in terms of financial services and healthcare solutions.

Investors therefore are keenly looking to back startups that offer lending, payments and insurance products to this segment of the population.

“In the vernacular space, investors are purely looking for fast growth India-specific solutions because it means you have found some product market fit,” said Aprameya Radhakrishna, founder and CEO of Vokal India, a Bengaluru-based Indian language knowledge sharing platform