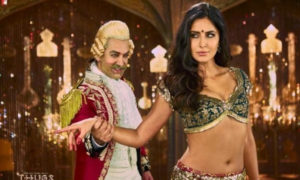 New Delhi: Whether Yash Raj Films hits the bull’s eye with its Diwali offering Thugs of Hindostan will be known once the film is released on 8 November, but the action adventure, touted to be the studio’s most expensive project ever with a budget of close to Rs 200 crore, is already on its way to recovering costs. The Amitabh Bachchan and Aamir Khan-starrer is expecting Rs 140 crore from the sale of rights to the film—both to a digital platform and satellite television. Amazon Prime Video and Sony Pictures Networks will get the rights to the film for between Rs 60-70 crore each. Both these platforms have long-term partnerships with YRF.

“Thugs of Hindustan is the most exciting TV premiere of the year. On the ratings front, I am confident that it will scale all possible records,” said Neeraj Vyas, business head, Sony MAX Movie cluster and Sony SAB, declining to comment on the deal size but adding that Sony and Yash Raj have had a partnership like no other.

Film trade experts say that the movie will be able to make about Rs 12-15 crore from music rights that Yash Raj sells under its own label. The studio is also distributing the film itself, so while revenue from multiplexes will depend on ultimate box office collections, it is likely to rake in Rs 10-15 crore from single screens across the country pre-release, since they have to pay minimum guarantee for showcasing the film.

Thugs, which has been directed by Dhoom 3 filmmaker Vijay Krishna Acharya, is to be released across 5,000 plus screens country-wide in its Hindi, Tamil and Telugu versions. The maximum screen count for a big-ticket Bollywood film remains at 4,500. It is also the fifth Indian film to have an IMAX release.

Atul Mohan, editor of trade magazine Complete Cinema, expects Thugs of Hindostan to be released in 1,500 screens across the rest of the world, much higher than the 1,200 count reserved for a Hindi film so far, including 550 and 200 screens respectively in the United States and United Kingdom, two major territories.

Given the buzz around the film and the extended Diwali weekend, film distributor and exhibitor Akshaye Rathi expects Thugs of Hindostan to make net box office collections of Rs 40 crore on its opening day in India alone and another Rs 20 crore overseas.

“Diwali is, by far, the best time of the year to release a film. Expectations from Thugs of Hindostan are far more also because while normally during this time at least two major Hindi films are slated for release, this year this is the solo Hindi release. We expect the film to take a spectacular opening and set new box office records,” said Ashish Saksena, chief operating officer- Cinemas at online ticketing site BookMyShow.

YRF has refrained from an aggressive promotional campaign with industry experts estimating its marketing budget to not exceed Rs. 10 crore. Beginning with the teaser launch on late founder Yash Chopra’s birth anniversary in September, the studio has only put out snippets of songs and behind-the-scenes videos of costume-making and fight sequences.

“It’s not like they are struggling to break even so they’d need a creative or high-pitched marketing strategy,” said Saurabh Uboweja, international brand expert and CEO of management consulting firm Brands of Desire adding that the studio’s investments have been on producing a film of this scale and with this star cast, announcing the release two years ago and delivering it on schedule. The fact that the film and its trailer have aroused curiosity helps reduce the marketing budget.

Some experts, however, remain skeptical of the film’s ultimate fate. Diwali releases have a history of opening phenomenally well and then failing to sustain. Salman Khan’s Prem Ratan Dhan Payo and Hrithik Roshan’s Krrish 3 are cases in point.

“No Diwali release has crossed Rs. 250 crore till date,” Mohan pointed out. “The ultimate response to Thugs will depend on how the content is received.”