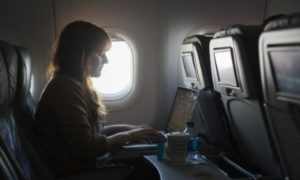 New Delhi: Despite new rules allowing wi-fi and voice calls onboard aircraft, air travellers may have to wait for some time before these become common features. While some airlines are clear they will not offer these services immediately, some are studying its business potential. Some airlines said they will need time to strike commercial arrangements with telecom players.

The country’s largest airline IndiGo is not in a hurry to get into inflight connectivity. An airline official who spoke on condition of anonymity said IndiGo has “no such plans at this stage.” IndiGo had 42.8% of market share in October. The company declined to comment on a set of queries emailed by Mint.

Jet Airways, the second largest carrier, told Mint that the airline was looking into the government decision to allow inflight telecom services.

“Jet Airways is currently reviewing the latest notifications as well as business cases towards provisioning in-flight connectivity (IFC) in the domestic skies and will make appropriate announcements in this regard in due course,” said a spokesperson for Jet Airways. Once a call is taken, offering the service is not a big deal for Jet. “Jet Airways’ current inflight entertainment service is future-proof and can easily be upgraded for providing full-scale IFC services, should that be decided,” said the spokesperson. The spokesperson said that in-flight connectivity has been a long standing demand of its guests.

The telecom department on Friday notified the Flight and Maritime Connectivity Rules, 2018 allowing airlines to enter into commercial deals with telecom players to offer in-flight telecom services. The rules are also applicable to ships in Indian territorial waters.

An official of Air India said the national carrier will roll out the service but the issue was still at the planning stage. “The government notification has come. We have to choose our vendor and we need time to complete the process,” said the official, who spoke on condition of anonymity. Air India is the third largest domestic carrier with 12.8% market share in October.

Budget airline SpiceJet, however, has concrete plans to offer inflight connectivity very soon. An email sent to the company remained unanswered at the time of publishing, but an official pointed to its leadership’s assurances in October of offering these services soon. SpiceJet chairman and managing director Ajay Singh had said at the time of induction of its new Boeing 737 Max that the company has selected a service provider for offering wi-fi on board. Singh had said that as soon as government approvals come, the airline will be able to roll-out the service.