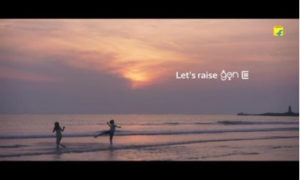 New Delhi: Pink is for girls and blue is for boys, dolls are for girls and cars are for boys are few gender based stereotypes that the new Flipkart digital campaign aims to break. In a two-minute long digital film, a montage of images feature young boys and girls acting against gender based stereotypes – a young girl is shown participating in a boxing match while a boy is seen helping his mother in the kitchen.

The campaign’s underlying message being that a generation treated equally today will treat each other equally tomorrow.

Through this campaign, Flipkart is urging the parents to raise ‘Generation Equal or GenE’ and not try to keep children’s experiences and expectations about life and their personalities separated right from their childhood based on their gender.

“As parents in 2018, we’d like to be progressive in letting our child choose for themselves in several aspects, so that they get to do what they love. Let the child experience the hobbies, passions, interests, and personality traits that come naturally to them whether it’s a boy who wants to learn cooking, or a girl passionate about collecting superhero toys,” said Apuarv Sethi, director – brand marketing at Flipkart.

Released on Flipkart’s official YouTube channel on 22 November, the campaign has already garnered over 5.4 million views. It has cross over 3.4 million views on social media website Facebook.

“Do you have a son, daughter, niece, nephew, or a friend’s child born a few years after the millennium, they are all part of ‘Generation Equal’. I believe real change will happen when we collectively decide to make the same rules that influence their lives and as far as we can, we must keep those rules the same for both boys and girls. That is the most real way to ensure our biases do not get pass on to them,” said Prashant Gopalakrishnan, senior vice-president – client services, Dentsu Webchutney.

Gen-E is Flipkart’s third socially relevant campaign this year after it released Penguin Dads campaign which talked about the equal role of fathers in bringing up children and Choose Your Age which celebrated those defeating age with experiences . In March, Flipkart said that it is changing the way it talks to its consumers by becoming more progressive and conscious of socially relevant issues in its advertising. This is the second big change in its communication exercise after 2015 when the company unveiled the tagline “Har wish hogi poori” (every wish will get fulfilled) which has now been changed to a more inclusive “Naye India ke saath” (With new India).

Naresh Gupta, strategy head and managing partner at advertising agency Bang in the Middle feels that the new GenE campaign has a great insight of raising children as equals but it loses track in terms of execution.

“The campaign starts well abut turns into a dose of parenting. I would have loved to have grown ups doing this as a role reversal to what Flipkart does. I wish they would have built on the insight further and pushed new boundaries in terms of overall execution and treatment of the campaign,” he said.