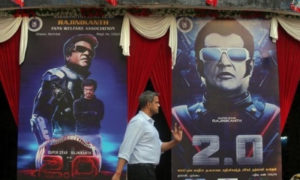 New Delhi: With numbers still trickling in, trade experts estimate Rajinikanth’s science fiction movie ‘2.0’ (review) to have crossed the ₹200 crore-mark in all-India box office collections by the end of its opening weekend—making it, in the process, the highest-grossing Tamil film ever. At last count, the S. Shankar-directed film had collected 165.50 crore—₹64 crore on Thursday, ₹45 crore on Friday and ₹56 crore on Saturday. The record for the highest opening weekend collections in India are held by war epic ‘Baahubali 2: The Conclusion’ that had made ₹385 crore in 2017.

According to trade website Box Office India, the jump in 2.0’s box-office collections was driven by the Hindi belt, especially North India and Mumbai, while South India—surprisingly—seems to be just about sustaining. In Rajinikanth’s home territory Chennai City, the film has grossed ₹10.09 crore in four days.

“Incredible jump in the collections of 2.0 (Hindi) today,” film distributor and exhibitor Akshaye Rathi tweeted on Sunday. “The audience has been bowled over by the entertainment quotient and the awesome quality of 3D. The mantra is—give people their money’s worth and they will give you their money.”

‘2.0’ has made about ₹33.69 crore in Andhra Pradesh and Telangana. It has crossed the $3 million mark in the US, overtaking Telugu superhit ‘Rangasthalam’ and now stands fourth in line in the list of all-time South Indian movies at the US box office after the two ‘Baahubali’ films and Rajinikanth’s ‘Kabali’. It has also made NZ$180,556 (₹87 lakh) in New Zealand and A$ 940,945 (₹4.83 crore) in Australia.

‘2.0’ has received the widest release for an Indian film yet at 10,000 screens worldwide across Hindi, Tamil and Telugu languages.

At last count, online ticketing site BookMyShow had recorded 3 million ticket sales for ‘2.0’, with the Hindi version contributing 30% of the total uptake.

Much of the burden for the recovery of 2.0’s ₹510 crore investment still rides on its theatrical business. While the satellite TV rights have gone to the Zee Network for ₹110 crore, about ₹80 crore has come from Karan Johar’s Dharma Productions for distribution rights of the Hindi version. The film is expected to cross ₹300 crore by the end of this week.