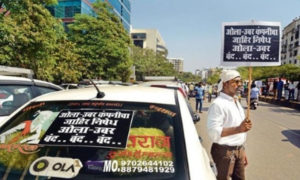 The strike by Uber and Ola cab drivers in Mumbai entered its eighth day on Monday. The drivers are demanding higher fares to meet rising fuel and other costs. ‘Mint’ analyses the demands made by the drivers and the effect of the strike on commuters.

Why are the drivers on strike in Mumbai and will it spread to other cities?

Drivers point to the fact that petrol, diesel and CNG prices have risen at least 10% this year, on top of rising insurance, maintenance costs. Drivers say they earn only ₹5-6 per km, as against ₹18-20 per km two years ago. While some drivers claim that they were promised a monthly income of over ₹1 lakh, they are not able to earn even ₹50,000 now. Some also claim unfair treatment by the two companies. Ola and Uber services have been affected in New Delhi, too, but to a limited extent. The strike may intensify in cities such as Bengaluru and Pune if a resolution is not reached soon.

What are demands of the drivers?

Apart from a base fare of ₹100, the drivers’ union has asked cab aggregators Ola and Uber to raise the per kilometre rates to ₹18-32 to improve the income of drivers. The drivers have also demanded higher fares for bigger cars to cover steeper maintenance costs, apart from refunds for cancellations by customers travelling to far-off destinations. The drivers have also demanded more security in terms of linking customers’ profiles to a government-approved database. The cab aggregators have been asked to be more accountable in terms of delisting drivers from their platforms. 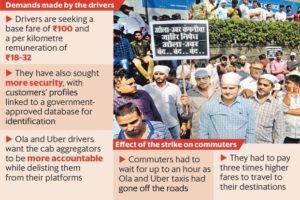 When will the strike end?

Local union leaders have spoken to representatives of Ola and Uber in Mumbai in order to reach a settlement. The drivers’ union has said the strike will not end until a resolution is reached.

How are commuters affected?

As thousands of cars went off the roads, daily commuters were charged higher fares by almost a factor of three and their waiting times went up to an hour. Other transport services such as trains, auto-rickshaws and non-AC taxis were in high demand, inconveniencing commuters. Shreya Kumar, a 21-year-old student in Mumbai, said she had to wait for 40 minutes on Sunday to book a cab, before ultimately taking an auto-rickshaw to avoid paying over ₹1,000 for a 12km trip that otherwise costs about ₹300.

Is the union hopeful of a resolution?

Although several meetings have taken place over the past few days, there has been no resolution as yet. According to the Maharashtra Rajya Rashtriya Kamgar Sangh, a settlement had almost been reached as of Monday evening. The drivers’ union is waiting for official and written communication from the two cab aggregators before calling off the strike. Drivers should “hopefully” be back on the roads on Tuesday, a senior union official said, provided all their demands were met.