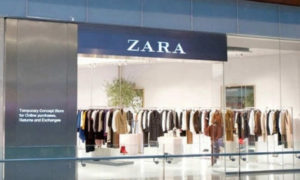 MADRID: Zara owner Inditex on Wednesday reported net profit of 2.4 billion euros ($2.7 billion) for the first nine months of its financial year, up 4 percent on the year, and maintained guidance for the second half of the year.

The world’s largest clothing retailer, which also owns up market label Massimo Dutti and teen brand Bershka, said in September it expected like-for-like sales growth of 4 to 6 percent over the second half of its financial year.

Inditex, which launched online sales for Zara in 106 new markets in November, said it had not discounted clothing from September like others in the apparel sector, resulting in gross margin growth of 108 basis points during the third quarter.

Like-for-like sales in the second half of 2018 to the end of November grew 3 percent after a good start to the season and an extraordinarily warm September, said Capital Markets Director Marcos Lopez in a statement accompanying results.