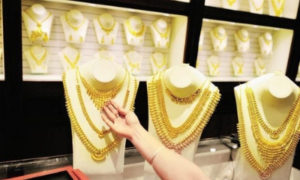 Mumbai: Indians are buying gold for as little as one rupee (1 cent) as retailers offer online sales in bite-sized portions to prop up shrinking demand in the world’s second-biggest consumer. Demand for gold is falling, partly as a result of government measures, higher local prices and the metal’s fading appeal among more youthful customers. That’s forcing jewelers to adapt online purchases to appeal to a more internet-savvy, younger population.

“A lot of people have been buying at one rupee,” according to Gaurav Mathur, managing director of digital platform SafeGold, which has partnered with payments apps such as Flipkart Online Services Pvt.’s PhonePe to sell gold starting at that price. “It’s a low-risk way to try the product.”

Buyers only get physical delivery of the metal once they have paid enough for one gram of gold, currently about Rs 3,200. The low barrier of entry, compared with a minimum purchase of 1 gram in the traditional market, and faster transactions, which can be done on a phone in about 40 seconds, are the biggest lures for the product, Mathur said.

Since its launch last year, about 3 million people have already transacted on the platform and the company, which counts the World Gold Council as one its investors, is targeting to raise this to 15 million by next year, he said. The market is still small compared with the country’s overall consumption of gold, which stood at 524 tons in the nine months ended September.

India’s consumption of gold, almost all of which is imported, has been declining because of the government’s efforts to curb its trade deficit and combat so-called black money by discouraging investors who used the metal to evade taxes. Demand for the yellow metal last year fell by about 23 percent from a peak of 1,002 tons in 2010. Meanwhile, benchmark gold futures in Mumbai are set to post a third year of annual gains in 2018 aided by a weaker rupee, which fell to a record low earlier this year.

Platforms offered by SafeGold, Augmont Enterprises and India’s most popular digital payments service Paytm, backed by China’s Alibaba as well as Warren Buffett’s Berkshire Hathaway, are trying to make inroads into a market dominated by traditional retail stores and chains such as Titan Co., the country’s top maker of branded jewelry, and Tribhovandas Bhimji Zaveri Ltd.

Augmont sells gold and silver coins and bars with quantities as low as 100 milligrams to make bullion affordable for the public, according to its website. With gold available in lower quantities at a more reasonable price compared with the retail outlets, the preference of people has gradually shifted to the digital gold buying method, it said in an emailed statement. Young buyers now prefer shopping for gold on e-commerce sites and apps rather than going to the store, thus saving time, it said.

Over half a billion Indians will come online in the next wave of internet users and shoppers, according to a report released jointly by Bain & Co., Google and Omidyar Network in August. Only over a third of India’s current 390 million users transact online, the report said, suggesting a massive untapped opportunity.

“With the way the e-commerce market was shaping, we realized that digital technology will soon be the future of gold buying,” Sachin Kothari, director at Augmont, said in the statement.

Amazon Go and Amazon Fresh: How the ‘Just walk out’ tech works

User Experience? Why is it important?