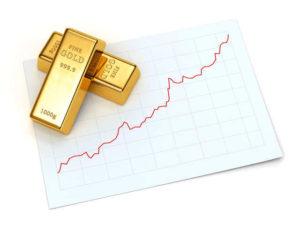 The domestic gold price is expected to rise by up to 3.15 per cent by Diwali due to weakness in the rupee and a rise in the international price of the metal, traders said.

According to industry executives, gold has some safe haven appeal in the backdrop of a battered bond market, volatility in the equity market and a crisis in the non-banking finance company (NBFC) sector, and could emerge as an asset class this festive season.

“Right now, there is no asset class in the market which can give good returns. The equity market has witnessed a bloodbath. The same is with the bond market. Even the NBFC sector is in crisis. In this scenario, gold can give some return. Internationally, gold price have started moving up, which is an indication that gold is becoming a safe haven,” said Surendra Mehta, national secretary, India Bullion & Jewellers Association. Mehta said gold price is likely to touch Rs 32,700 per 10 gm, up 3.15per cent from Friday, when it was trading at Rs 31,700.

In the international market, gold edged down on Friday but held near the over two-month high touched in the previous session, when prices surged over 2per cent as a rout in global stock markets boosted the metal’s safe-haven appeal. Spot gold was down 0.2 per cent at $1,221.06 an ounce in intraday trade.

A day earlier, it had jumped about 2.5 per cent after marking its highest since July 31 at $1,226.27. That was also the metal’s best one-day percentage gain since June 2016. “This sort of small correction will be there, but it will not see a huge drop, certainly not below this level,” Mehta said.

“Speculative positions in gold and silver have been on the short side. Very short covering can trigger a rally in gold. The precious metal has just become a safe haven,” said Gnanasekar Thiagarajan of Commtrendz Research. Thiagarajan said gold will definitely soar to Rs 32,400-32,500 per 10 gm by Diwali.

The gold trade is expecting a better festive season compared with last year, when compliance issues had kept consumers away from the precious metal. “All other asset classes are in the red except gold. Apart from marriage season demand, we are hoping gold to attract investment demand as well,” said Nitin Khandelwal, chairman of All India Gem & Jewellery Domestic Council. India imports 800-850 tonnes of gold annually. Of this, 60 per cent is bought by consumers in rural areas.