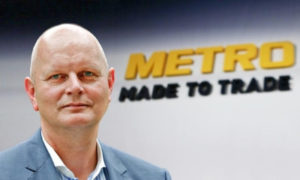 BENGALURU: Metro AG, the world’s fourth-largest retailer that operates wholesale stores in India, said the country’s updated policy on foreign direct investment in ecommerce will help small and independent businesses, which have suffered because of deep discounts offered by heavily funded online platforms.

“Whenever big organisations try to take advantage at the cost of the small people, I get worried,” Olaf Koch, Metro’s global CEO, told ET. “The recent discussion about how the pure-play online businesses are approaching one or the other thing, I sense that as a reasonable discussion because it should be a level playing field. One should not eliminate other people just because of muscle. That’s not good.”

Metro Plans to Open Compact Stores
The tweaked policy appears to be squarely aimed at protecting the interests of domestic retailers, which have seen consumers shift towards online companies, attracted by deep discounts.

“This will facilitate a level playing field for all small and medium businesses, traders and kiranas who were trying to compete and stay relevant in the deep-discounting competitive landscape. The government should go one step further and incentivise the modernised and digitised kiranas and small businesses,” Koch said.

The BJP-led government tightened norms for FDI-funded ecommerce companies including Flipkart and Amazon in December, making it tougher for them to offer discounts and cashbacks to online shoppers. It said such entities cannot exercise ownership or control over inventory and must provide services such as warehousing, logistics and advertising to all sellers in a fair manner. It disallowed ecommerce companies from entering pacts for the exclusive sale of products.

Flipkart, controlled by Walmart, the world’s largest retailer, and Amazon have operated in India by getting wholesale entities to purchase goods in bulk from manufacturers and offering them on the marketplaces through preferred sellers.

These preferred sellers are typically companies in which the ecommerce company or a group entity may hold an equity stake. The domestic trade lobby saw this route as holding inventory indirectly. While Amazon has said it will continue to comply with the laws of the land, Flipkart has maintained that a broad, market-driven framework should be developed through a consultative process to promote fair, pro-growth policies.

Metro doesn’t sell products directly to consumers in India. It is an organised wholesaler or cash-and-carry operator that sells close to 7,000 products across a range of categories to local stores, hotels and catering companies.

Koch’s views are in contrast to Walmart-controlled Flipkart and Amazon, which are likely to seek an extension of the February 1 deadline to comply with the revised rules since they may have to overhaul their existing business models.

Kishore Biyani, founder of the Future Group, India’s biggest retailer, also favours the new policy and has termed it a game-changer for the retail sector.

Metro, which entered India in 2003, is the market leader in organised trade, with revenue of 776 million euros in the financial year ended September 2018. The company said it achieved break-even last fiscal, without elaborating on the numbers.

Its closest rival, Walmart, operates as a wholesaler in the country, but also acquired Flipkart for $16 billion in May. Yet, Düsseldorf-based Metro is unperturbed.

“Why should we change direction just because of the fashion of a multi-billion transaction?” asked Koch.

Metro, which has 3 million members locally, has identified India as one of its “focus expansion countries” alongside Russia, China and Turkey and plans to take its store count to 50 by 2020 from 27 now. There are an estimated 10 million kirana stores in India and Metro said it will open compact stores to penetrate smaller towns.

While the November 2016 demonetisation choked the cash-based unorganised retail trade in India, the goods and services tax also rewired the retail ecosystem as companies shifted away from unorganised wholesalers, who may not be compliant with the new tax regime. This, in turn, boosted memberships of large wholesalers.

“The progress on regulations is significant and the ease of doing business in India is much better than four years ago. The clarity as an independent business owner to run business is much stricter,” said Koch, who has been chairman of Metro’s management board for two years.