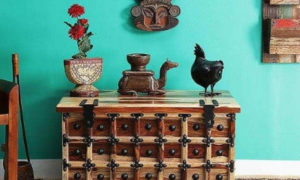 The funds from the existing investors will help Pepperfry expand its offline presence and diversify, said three people with direct knowledge of the development.

“The current investors are looking at investing $100 million into the company to help it with its next phase of growth,” said one person with knowledge of the matter. Fresh equity will be issued in this round and the investors will seek to maintain their level of holdings in the company. 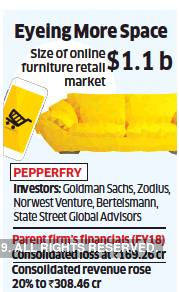 Company officials had said earlier that they intend to take Pepperfry public and the investment from the group led by State Street was among the last private funding to be raised before filing for an initial public offer. However, it is not clear whether the ongoing exercise is part of the pre-IPO investment as many IPO aspirants have shelved their plans amid choppy market conditions.

Pepperfry, founded by former e-Bay executives Ambareesh Murty and Ashish Shah in 2011, has so far raised about $197 million.

50-70 stores likely this year
The company has 34 offline stores called Studio Pepperfry and is targeting 50-70 such outlets by the end of 2019.

“It will also look at entering the home renovation and modular furniture segment,” another person said.

“Our goal is to continue expanding to become a fullstack player in the home and interior space including interior designing and interior projects,” Pepperfry chief executive officer Murty told ET in an interview in November. “We will continue to expand our house brands and foresee the modular kitchen and wardrobe segment as a key opportunity area.”

Spokespersons for Murty, Goldman Sachs and Bertelsmann declined to comment on the funding plan, while a spokesperson for Norwest Venture did not respond to emailed queries.

Competition in India’s furniture market is heating up, with Flipkart planning to go aggressive and deep in this segment and Amazon stepping up its play in the space. Ikea opened its first store in India in Hyderabad last year and plans to launch two stores in Mumbai and Bengaluru, investing over ?1,000 crore.

India’s online homeware and furniture retail market is expected to cross $1.1 billion in revenue this year, up from about $900 million in 2016, according to industry estimates.