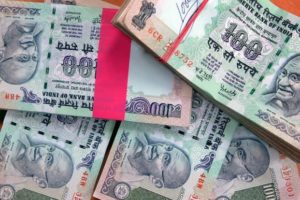 Mumbai: Is it too early still to call time on the almost year-long slump in India’s bond market? Consumer prices grew slower-than-expected in September, according to data late Friday, supporting a surprise decision by the central bank to hold rates. With the Reserve Bank of India set to spend 360 billion rupees ($4.9 billion) on bond purchases in October, and the rupee pulling back from a record low, bond traders are turning their focus on where crude oil prices are heading.

“The rupee has behaved well in recent days, as well your CPI, and we have RBI OMO bond purchases this month,” said Vijay Sharma, the New-Delhi based executive vice president for fixed-income at PNB Gilts Ltd. “The biggest factor at this point is how oil behaves. If crude crosses $84, that would be a mood spoiler.”

India’s sovereign bonds, which have dropped in 10 of the previous 12 months, rebounded in the past three days as the government took more measures to support the rupee and Brent prices pulled back from more than $86 a barrel. 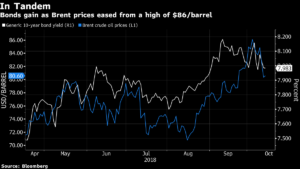 Yield on the benchmark 10-year bonds dropped almost 10 basis points from Oct. 9 to 7.98 percent on Friday. Though there may be more money on the table to drive it down to 7.90 percent, “the rally doesn’t seem to be too deep,” said Sharma.

“Crude remains the risk,” he said.