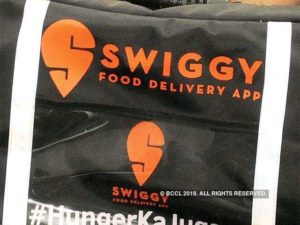 MUMBAI: Swiggy saw its top-line surge in FY18, with operating revenues more than trebling to Rs 442 crore from Rs 133 crore last year, as the food-delivery unicorn startup expanded its geographic footprint across the country.

Swiggy expanded its operations from seven cities in March 2017 to 12 by the next March, even as order volumes increased more than three times during the period. Order volumes doubled in the last four months alone. Swiggy ended September with more than 21 million orders in absolute terms, according to sources tracking the sector.

The battle for the top spot in the food delivery market, though, cost the firm dearly, with losses rising more than 93% to Rs 397 crore from Rs 205 crore last year, as per financial documents filed with the registrar of companies and accessed by data research platform Tofler.

This implies that Swiggy earned Rs 1.11 for every one rupee it lost in FY18. Swiggy’s losses, however, are far deeper than Zomato’s Rs 106 crore in FY18.

This fiscal year is expected to further strain the resources of the firm, both on the losses and expenses fronts, as the food tech industry is engaged in a discount-driven battle among Swiggy, Zomato, UberEats and Foodpanda, firms seeking to grab larger mind shares and wallet shares of their users. 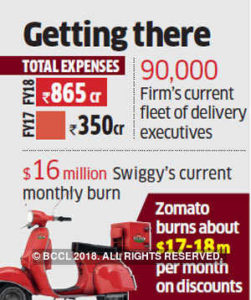 While growth in operational revenue has been stellar, the firm saw total expenses more than double to Rs 865 crore as compared to Rs 350 crore last year. The rise in expenses has come mainly on the back of the firm’s increased efforts to widen its fleet, which now stands at more than 90,000 delivery executives.

Since January, both Swiggy and Zomato have been increasing spends through discounts and incentives as they remain locked in a battle for supremacy. While Swiggy’s current monthly burn is pegged at over $16 million, Zomato burns about $17-18 million per month, according to people tracking the space.

Despite an increase in expenses, Swiggy’s cost to revenue ratio has reduced significantly implying that at 223%, the revenue increase by the firm outpaced that of total cost which rose 147%.

“In FY18, we remained focused on delivering exceptional value to our users, while making significant investments for the future and improving our operational efficiencies as we start hitting scale. This has resulted in the operating revenue increase outpacing the cost increase, further strengthening our leadership position as India’s largest food ordering and delivery platform. We will continue to double down on this growth as we expand to more cities and experiment with innovative ways to bring more convenience to the lives of consumers,” said a spokesperson for Swiggy on the firm’s FY18 financial performance.

Zomato claimed to have reached market leadership in India’s food delivery landscape in September, having hit the 21 million monthly order run rate, implying that the firm saw its highest daily order volume during the month touch 700,000 orders each day of the week.

To be sure, order run rate is not the absolute order volume but helps project future order volume for the month, and is calculated based on one week’s volume (in this case, the highest week during September).