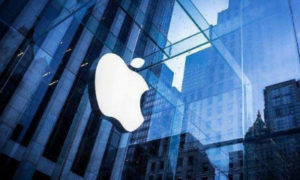 New Delhi: Tech giant Apple’s India unit registered 140 per cent jump in its net profit at Rs 896.3 crore for the fiscal ended March 2018, as per regulatory documents filed by the company. The iPhone maker, which competes with the likes of OnePlus and Samsung in the premium smartphone category in India, had registered net profit of Rs 373.3 crore in 2016-17, the documents filed with the Corporate Affairs Ministry showed.

The company saw its total income (including other income) rising about 12 per cent to Rs 13,097.6 crore in FY2018 from Rs 11,704.3 crore in the previous financial year, documents sourced by business intelligence firm Tofler showed.

Apple did not respond to an emailed query.

During the company’s earnings call in July, Apple CFO Luca Maestri had stated that Apple was witnessing great momentum in emerging markets and that it had established new June quarter records for Mac sales in India.

Earlier in the year, Apple CEO Tim Cook, too, had emphasised the importance of the Indian market. He had said the company plans to launch all its initiatives, including retail, in India where it has an “extremely low” overall market share but offers huge opportunities. The CEO also stated that Apple was “putting a lot of energy” in India and working with the carriers in the market.