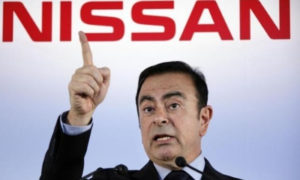 Former Nissan chairman Ghosn, 64, has been in detention since his November 19 arrest on suspicion of under-declaring his income by some five billion yen ($44 million) between 2010 and 2015.

Authorities are also widely expected to re-arrest him later Monday over separate allegations that he also under-reported his income by a further four billion over the past three years.

Under Japanese law, suspects can be re-arrested several times for different allegations, allowing prosecutors to question them for prolonged periods — a system that has drawn criticism internationally.

Monday was the final day prosecutors can hold Ghosn and close aide Greg Kelly before either charging or re-arresting them, and a further arrest would allow them another 22 days of questioning.

In addition to charges against Ghosn, prosecutors also indicted Kelly and Nissan itself, according to local media, as the company submitted the official documents that under-reported the income.

Ghosn denies the charges and is in a “combative” frame of mind, according to sources at Renault, the company he still formally leads — even if the French car giant has appointed an interim chairman.

The Japanese firms in the three-way alliance with Renault — Nissan and Mitsubishi Motors — have both sacked the Franco-Lebanese-Brazilian as chairman.

The millionaire auto sector star, who attracted some criticism for a perceived lavish lifestyle, is now alone in a spartan cell in a Tokyo detention centre, in a tiny room measuring just three tatami mats — around five square metres.

He has reportedly told embassy visitors he is being well treated but has complained of the cold, with Monday’s temperature in the Japanese capital hovering around five degrees Celsius.

He spends his time reading books and news reports and is said to be unhappy about the rice-based food.

According to local news agency Kyodo, he has admitted signing documents to defer part of his salary until after retirement but said this amount did not need to be declared as it has not yet been definitively fixed.

A source close to the investigation has said Ghosn and Kelly allegedly put the system in place after a new law came in obliging the highest-paid members of the firm to declare their salary.

Ghosn is suspected of deferring part of his pay to avoid criticism from staff and shareholders that his salary was too generous.

“We are closely watching if he is actually indicted and then found guilty,” said Satoru Takada, an analyst at TIW, a Tokyo-based research and consulting firm.

“If he is exempted from prosecution or found innocent, it is going to create huge confusion in Nissan’s management,” Takada told AFP.

It is unclear if Ghosn can be bailed before a potential trial.

In Japan, prosecutors and defendants begin a trial at a district court and can appeal to a high court and the Supreme Court. It may take several years before reaching a final judgement.

If found guilty, Ghosn could face a 10-year prison sentence.

The affair represents a staggering turnaround for a figure celebrated for saving Nissan from the brink of bankruptcy and rebuilding it as a money-making subsidiary of Renault.

Nissan has begun a process of choosing Ghosn’s successor, with the final decision expected on December 17.

His arrest has sparked incredulity at Renault, which owns 43 percent of Nissan and says it has not seen a detailed account of the charges against Ghosn.

It has also fuelled anger in Lebanon, with digital billboards around Beirut proclaiming “We are all Carlos Ghosn” under a picture of the magnate.

“A Lebanese phoenix will not be scorched by a Japanese sun,” Interior Minister Nohad Machnouk has declared.