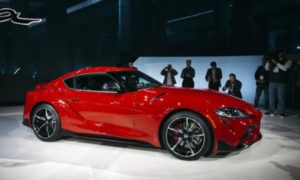 After multiple leaks on blogs and social media, Toyota unveiled in Detroit on Monday the fanboys’ most darling of darlings: the 2020 Supra.

It’s the first time Toyota Motor Corp. has made and sold a new Supra in the U.S. in 21 years.

It’s also the first time the automaker has built a throwback sports car that includes BMW DNA—the modern Supra shares much of its engineering and mechanics (chassis, engine) with the Z4, BMW’s $50,000 coupe.

The timing on this tiny two-seater is telling. It comes as the American auto market is increasingly stretched between SUVs and sports cars, with sedan sales fading. Along with the Ford Shelby GT500, the Supra is the only notable sports car debut of the show.

“Certainly, there are still vehicles that prioritize fun driving—I don’t think that’s going away,” says Stephanie Brinley, the lead automotive analyst for researcher IHS Markit. “But customers have shifted, and they prefer utility vehicles, and that’s what’s selling,” she says. “The auto show in Detroit reflects that.”

Supra also arrives just as iconic cars from the 1990s are becoming popular to collect and drive among millennials (see also the Acura NSX, Nissan GT-R, and Porsche 928). One Bring a Trailer sale saw a late-era Supra with just 7,000 miles on the odometer sell for $121,000, while a similar ’94 Supra went for $80,500 earlier last year. 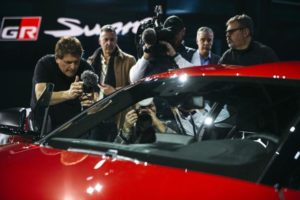 The new Supra takes some cues from predecessors such as the 1965 Sports 800 (a tiny two-seat coupe similarly at home on the road and on the track); the 1967 Toyota 2000GT (they both have “double bubble” rooflines); and the ’90s-era Supras with much the same body style (prominent front grille, rear hatchback) as the one unveiled in Detroit.

Today’s version, though, comes with modern conveniences such as LED headlights, auto-dimming mirrors, rearview cameras, and rain-sensing wipers. The standard-issue wheels are 19 inches. 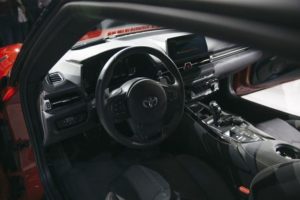 Inside, the car is well-suited to couples who want to use it as a daily driver with a day or two of track driving thrown in. It comes with a small (6.5-inch or 8-inch, depending on the version) computer screen display, automatic climate control, and optional adaptive cruise control.

Under the hood there’s a turbocharged straight-six-cylinder, 335-horsepower engine and eight-speed transmission with paddle shifters. (All of those are made in BMW’s hometown of Munich.) It can hit 60 mph in 4.1 seconds and has a top speed of 155 mph.

Even more important, it’s perfectly suited for driving on the track: A feather-light 3,397 pounds and rear-wheel propulsion combine for nimble dynamism at high speed. Two driving modes—Normal and Sport—come standard. 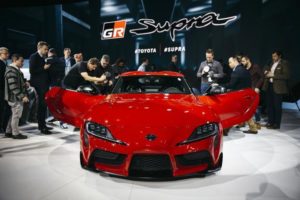 Not that everyone is as enthused as the guys at Jalopnik.

“It feels like online people are expecting the Supra to be the next version of the 911,” Brian Moody, the executive editor for Autotrader, told Bloomberg in Detroit. “I think it’s going to be a car that you can get. A good performance car,” he said. “But I feel like the expectations online are building toward something it can’t deliver: nostalgia.”

Time will tell. Sales start this summer. Pricing starts at $49,990.