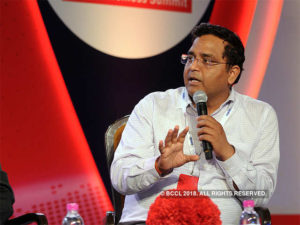 NEW DELHI/BENGALURU: China’s Alibaba and Japan’s SoftBank-backed Paytm Mall is stepping up focus on categories like grocery and fashion, which can increase repeat customer transactions as it looks to compete with Walmart-backed Flipkart and Amazon India, which control over 80% of the online retail market. Paytm Mall wants to differentiate itself, with online to offline (O2O) push to deliver 50% of the orders in 24 hours from 33% right now, according to founder Vijay Shekhar Sharma.

Paytm Mall, which is losing about $200 million every year, plans to challenge the market domination of its rivals by becoming the alternative for brands and retailers.

“Retailers and brands both have understood the onslaught of these online retailers who have disintermediated them,” Sharma told ET. “Who (brands and retailers) let their product get listed, let the demand get generated (for etailers), and then they (etailers) build a private label. Which is actually counter intuitive for them to list on those platforms. So, we are getting a sort of an advantage position and building a business model of not being an online retailer.”

Paytm Mall recorded gross sales of around Rs 1,000 crore in September with about 8 million orders during the month. Of these orders, 3 million were in grocery with remaining coming from fashion, home and then electronics. The average order value on the platform is Rs 1,300. The company said it has about 5.5 million daily active users, 80,000 sellers and a product portfolio of 110 million items. 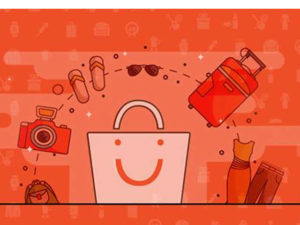 During the festive season this year, which started on October 9 and ends with Diwali on November 7, Paytm Mall is targeting gross sales of about $500 million, according to Sharma. But if one includes digital categories like mobile recharges and travel ticketing, where Flipkart and Amazon India have also forayed, Sharma thinks the company will cross over $1 billion in gross sales. But recharges and the travel ticketing business is housed under One97 Communications, from which Paytm Mall was demerged in 2016.

During the festive sale from October 9-14, online retailers saw their total gross sales increase 64% from $1.4 billion to $2.3 billion, according to data from market research firm RedSeer. While Flipkart had 51% market share, Amazon had 32% and the others had 17% share. RedSeer did not disclose Paytm Mall’s market share.

According to Forrester, Paytm Mall’s marketshare for the entire 2017 was 5.6%, with GMV of $1billion.

According to Sharma, Paytm Mall wants customers who come in once a week, if not daily. “We don’t want to be the platform that you come to buy a phone, which you will once a year,” he said, taking a swipe at rivals Amazon India and Flipkart, both of whom claimed market leadership in the smartphone space.

“They are the market of GMV, we are the market for habit.” Sharma said while he won’t compete fiercely in the smartphone battle against Flipkart and Amazon, for high value categories including large appliances, laptops and automobiles, the company is banking on its offline brand and store partners, who generate 20% of overall offline sales to drive transactions.

Interestingly this year, all three commerce players will compete in the turf of the other, across product and services categories.

While Flipkart has been a leader in the smartphone and large appliance business, Amazon last year focussed on high repeat categories like grocery and its prime business, and Paytm holds leadership in the recharges and ticketing category.

This year, all three marketplaces are going deep in every vertical as they compete to grab a piece of market share previously owned by the other.

But according to analysts tracking the space, it will not be easy for Paytm Mall. Industry experts said Paytm Mall has been able to attract customers only on the basis of cashbacks, which have pushed sales in the fashion and smartphone category on the platform, but other than that, more sales are in small accessories. “The O2O model has also been slow to pick up, with cashbacks as the only incentive for customers,” an analyst tracking the space said on condition of anonymity.