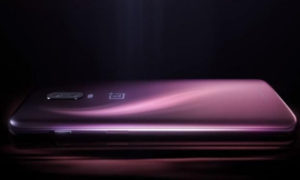 OnePlus 6T, the teardrop notched, physical fingerprint scanner-less yearly upgrade to the OnePlus 6 has now received the colour option everyone was waiting for—Thunder Purple. The new colour comes only in the 8GB RAM/128GB ROM variant, and is priced the same as the regular OnePlus 6T, at Rs 41,999, and will be made available on Amazon starting November 16.

The Thunder Purple trim is special as it has a two-tone gradient finish— purple and black—which changes its shade at different angles. The light also reflects in a peculiar fashion to produce an S-effect on the back, similar to the one you’d find on a Moto G6.

The OnePlus 6T is an incremental upgrade over the OnePlus 6, which was launched in May this year. The OnePlus 6T comes with a 6.41-inch Optic AMOLED display at the front with a resolution of 2340×1080.

At the heart of the device is the same powerhouse found inside the OnePlus 6—the octa-core Qualcomm Snapdragon 845, paired with 6GB of RAM in the 128GB variant and 8GB in the 256GB variant. There’s neither expandable storage nor a 512GB variant this time, so you might have to wait till May next year for saving more Netflix series on your phone.

Backing the device is a 3,750mAh battery with OnePlus’ proprietary Dash Charge.

The software end of things has also seen some changes. For instance, the gesture controls have been updated. There’s now dedicated recents gesture that allows you quicker access to view your recents apps. The software update also aims at increasing battery life and introduce some digital well-being features.

The OnePlus 6T skips on the headphone jack—so you’re left with either Type-C or Bluetooth sound accessories. The Type-C Bullets do not ship with the phone and you will have to shell out an extra Rs 1,499 to get one of them.